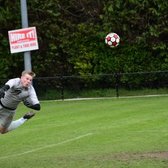 The Saltmen put in yet another big performance to register an 11th straight victory over bottom of the table Allscott Heath, maintaining a 100% home record at Walshes Meadow this season, with just 1 home game to go.

It was the visitors who started the quicker, with some well worked attacks which ultimately came to nothing, however Spa were a goal up within just 3 minutes courtesy of a James Lemon header.

Spa didn't waste any time, and Captain Lemon added a second within 10 minutes.
It was soon 3-0 when Haydn Morris received a poor clearance from visiting 'keeper Jack Richards, and scored the goal of the game with a delightful curled chip shot that found the top corner from 20 yards.

Both Perry Moss and Connor Baker netted for Droitwich before the break to make it 5-0.

Just a minute after the 2nd hhalf had kicked off, Lemon scored his hat-trick and 16th goal of the season, before being substituted for Tom Smith.

Allscott netted a consolation as Matt Oliver parried a well driven shot in to substitute Weladji, but Spa soon retored their 6-goal lead when Luke Molloy converted a penalty, awarded for a push on Cal Green.

Haydn Morris had the last word, capitalising on another poor clearance to twist, turn and finish well passed the helpless Richards.

The Saltmen go in to the huge fixture against Gornal Athletic on Wednesday night at Walshes Meadow (ko 7.45pm) full of confidence.
With just one point separating the two sides at the top of table, Wednesday evening could well decide the destiny of the League title.